From September 2010 all Unlimited Displacement boats must be fitted with a safety cell.

The inboard power boat has been around the longest. Basically an engine mounted inside the boat and driving through a shaft to a propeller outside the boat.

Apart from the obvious differences of engine size, inboards have 2 distinct types. The displacement and the hydroplane. These further have several engine size classes.

Displacement Boats This term is a remembrance of boats of old, when they actually pushed their way through the water "displacing" is as they went, this is what causes the wash or wake behind a boat, as the water rushes in behind from where the boat has pushed it out of the way. At racing speeds modern displacement boats do not actually displace much water at all and become planing hulls, at very high speeds leaving a wake only a few centimetres high. We still call them displacement boats though. 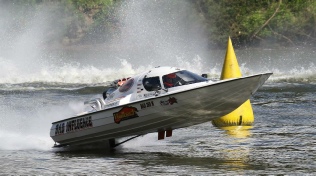 Most modern displacement boats are the rear engine design. This is just what it says, the engine is mounted at the rear of the boat and drives through a shaft to a v drive gearbox forward in the boat. This allows a much flatter shaft angle so the propeller pushes the boat forward, and not into the air.

Mid mount engines, have the motor mounted in the centre area of the boat. These generally drive the propeller shaft directly and have a much steeper angle on the shaft, which at high speeds will try to lift the boat from the water.

Front engine boats. These are now comparatively rare, they were however the state of the art before the development of rear engine boats. They were called racing skiffs. They were really centre mount boats with the driver at the rear, to add weight to the back of the boat to try to keep the propeller in the water. 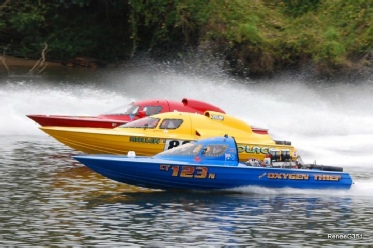 Hydroplane Boats - Modern hydroplane boats are what is known as a 3 pointer. This means the boat rides on 3 points, the propeller and the tips of the 2 sponsons. Sponsons are best described as almost 2 other small boats built into the hull and protruding below the rest of the hull. This is an over simplification though. At speed the boat rises onto the sponsons allowing air to rush under the boat lifting it from the water. The balance of these boats is very critical. If they ride too high in the front, they will not glide over the water, but try to take off. This is not a good thing. If the nose too low, they will try to push the nose into the water. This also is not a good thing. 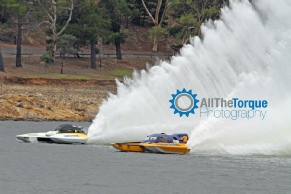 Most modern post 1970 hydroplanes are rear engine design, and use the same type of V Drive gearbox as do rear engine displacements. In a straight line these are the fastest type of race boat, although with little in contact with the water they tend to take very wide turns, but in general turn better than most rear seat hydroplanes.

Rear engine hydroplanes were the state of the art prior to about 1970, and many are still active in competition and in specific "classic hydroplane" classes.

Another type of what is under APBA rules a hydroplane is the Inboard Tunnel boat. These are pretty much the same idea as outboard tunnel boats, but are usually much heavily built to carry the weight of the inboard engine. These drive through a "stern drive" which is like the bottom part of an outboard engine, where the propeller turns with the unit and helps to push the boat around the corner. 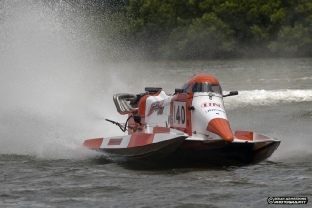 Under APBA rules a hydroplane is any boat with 2 or more distinct planing areas with a step of more than 35mm. Before the development of the 3 pointer design in the 1950's, there was the Step Hydroplane. To the casual observer these looked like displacement boats. However out of the water they had several steps down the hull, much like the teeth of a saw blade. The object was to reduce the amount of the hull in contact with the water, as the boat rode on the tips of the teeth. Meaning less drag and more speed. There are presently none of this type of boat in competition today. 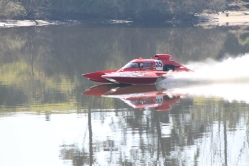 Keep in mind racers are always trying to gain a legitimate advantage and what is top of the heap today may be obsolete tomorrow.

Hydrofoils These are boats that ride on foils that stick down below the boat, and ride on those foils. Hydrofoils are prohibited from power boat competition

As this image clearly shows, the top driven shaft and the bottom output shaft. These are fitted with gears that may drive the propeller faster, slower or at the same speed as the engine.

These come in 2, 3, 4 or more blades, different shaped blades, more or less pitch (twist) on the blades. They all have one purpose, to push the water back and drive the boat forward. What propeller is best for any particular application is a matter of wide speculation. Once a racer finds a propeller that suits his boat he treats it better than his wife.

Blown Injected.This image shows a supercharger fitted with a fuel injector. The blower is driven by a special flat type belt from the engine crankshaft. The pulleys can be changed to drive the supercharger faster than the engine. Blowers can multiply the engine power by forcing more air into the engine than it can suck in by itself, adding 1000 hp or more. All this extra power does impose a great strain on the bottom end of the engine. This is the setup you will see on most unlimited engines.

Unblown Fuel Injection. Unlike carburettors that let the engine suck fuel into airstream as it passes through the carby. Fuel injectors spray fuel into the airstream under high pressure.

Unlike modern car electronic fuel injection with comparatively small airflow, race fuel injection meter the fuel mechanically and have much larger airflow allowing the engine to suck in as much air as it needs to.

Has been around since the 1920. In recent years outboards have begun to be very powerful and can attain speeds around the 250kph mark

Apart from the obvious differences of engine size, outboards have 2 distinct types. The mono hull and the hydroplane. In practice most non mono outboards are tunnel boats, which unlike inboard hydroplanes have full length sponsons. Under APBA rules they are still classed as hydroplanes

Mono Hulls   These hulls are generally V bottom boats much like your average outboard ski boat. 20 years ago that was what they were, regular ski type hulls. Now days there are specialist V Bottom hulls built just for racing and fast skiing. With the outboards ability to be trimmed by using hydraulics on the motor, they can be "jacked out: for maximum speed, and jacked in for better cornering.

At speed the modern mono hull rides on only the very last few inches of the hull, with the boat well out of the water. They are called mono meaning one hull

Hydroplane Boats (Tunnels)  I can only recall seeing a few actual hydroplane hulls in my time in the sport. Like their inboard counterparts, they are very fast, but lack cornering abilities. Tunnel hulls are classed as hydroplanes under APBA rules. At race events you will hardly ever hear anyone call them a hydroplane, they are just called tunnels. Tunnel boats are the best and hardest cornering of any boat type inboard or outboard

Tunnel boats have been in racing since the mid 1960's however development took some years to get them right, being refined all the time, until they have reached the level they are today. From being made out of heavy plywood to the very light ply and exotic materials used today, weighing a fraction of their ancestors 25 years ago. Overseas they are also called catamarans. 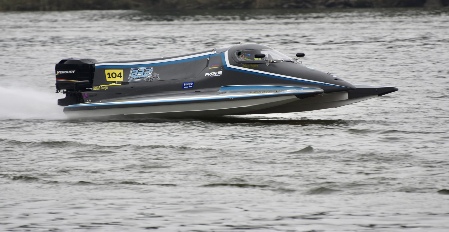 Hydrofoils These are boats that ride on foils that stick down below the boat, and ride on those foils. Hydrofoils are prohibited from power boat competition.

These are very rare and to our knowledge there are none currently racing. They were however very fast but cornering left something to be desired They are still very popular in small classes in the USA, where I nicked this image from.

Unlike the gearbox pleasure outboards are fitted with. The fastest outboards use a very slim unit driving the propellor very much faster. These slim units take a lot less power to push through the water, allowing more to be used to push the boat.

The Drag Boat, is a boat designed like their land bound cousins to accelerate from idle to a point 1/4 mile away in the quickest possible time Originating in the USA in the late 1950's

Drag boats have similar classes to circuit racing with many circuit displacement boats also competing in drag events. Circuit hydroplanes are not suited to drag boat racing, and drag hydros have almost nothing in common with circuit hydroplanes. Outboards also compete, to our knowledge there are no dedicated drag outboards in Australia, and these are circuit boats having a go.

Flatbottoms are just that flat on the bottom, unlike circuit boats that have a modest V bottom.

Hydros Are usually imported from the USA and are much narrower than their circuit namesakes. The propellor is up under the boat and does not protrude out the back like circuit hydros. Like circuit hydros these also ride on 3 points, the tip of each sponson and the propellor 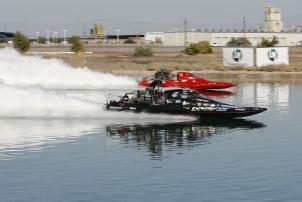 Thank you to the photographers whose images appear below 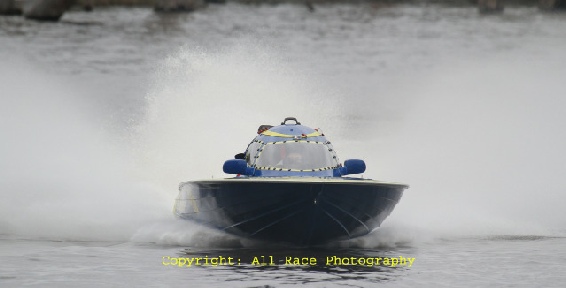